When Faith Bult’s six-year-old Rottweiler started limping on his left leg, she figured Punch tore another ligament. "Three years ago when he blew his ligament on the other leg, the orthopedic surgeon said he had a 50-50 chance of doing the same thing with this leg," explains the Washington dentist.

After scheduling surgery to repair the assumed rupture, Bult was blindsided by what happened next: Punch’s limp suddenly worsened, accompanied by knee swelling. Rushing him to the vet, a rapidly-growing lump between the size of a golf and tennis ball was found on the inside of his leg. The diagnosis: An aggressive bone cancer called osteosarcoma. 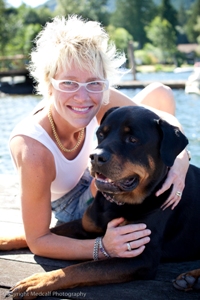 "I couldn’t speak and could barely breathe when I received the news," says Bult. "I went to the bathroom and vomited." Punch is affectionately called Bult’s "Velcro dog," because "he never leaves my side," she says. "He’s my heart. He and I live inside each other. Every morning he greets me wiggling his body and crying from happiness. He’s so excited to see me. When I come home from work, he stands on top of the stairs and smiles by pulling his teeth back. It’s so appropriate for a dentist’s dog," she says, chuckling. "Punch is also my running partner, helping me prepare for triathlons and races. He’s probably run 4,000 to 5,000 miles with me."

Bult immediately began researching the best course of treatment for her beloved dog. "It’s been a gut-wrenching emotional week talking to vets, radiologists and oncologists," she relates, shortly after the diagnosis. "This is ripping my heart out."

Despite her devastation, Bult enrolled Punch in a canine research project focused on pinpointing diseased genes associated with osteosarcoma. "As a dentist, I‘ve seen what research has been able to accomplish for my patients," she says. While Bult knows osteosarcoma will eventually claim Punch’s life, she hopes contributing to this research by donating samples of Punch’s blood and DNA will potentially help future generations of dogs diagnosed with this disease.

The most common malignant bone cancer in dogs, osteosarcoma accounts for five to six percent of all canine cancers, or 8,000 to 10,000 cases reported annually in the United States. Large breed dogs have a higher risk of developing osteosarcoma within their lifetime than other breeds, typically diagnosed between seven to eight years of age. In most cases, metastasis and death follow within a few months or years. The median survival time for dogs treated with amputation plus chemotherapy is 12 months, with only 20 percent surviving two years.

To determine the cause of canine osteosarcoma, scientists are working to identify inherited mutations in genes that may make certain breeds susceptible to this devastating disease. Hot on the heels of such research is Kerstin Lindblad-Toh, Ph.D., of the Broad Institute of MIT and Harvard in Cambridge, Mass.

Leading the Institute’s dog disease-mapping group (part of a continuation of the institute’s Dog Genome Project), Lindblad-Toh is also professor of comparative genomics at Uppsala University in Sweden and director of vertebrate genome biology at the Broad Institute. She headed the Broad Institute’s team credited in 2005 with first sequencing the complete dog genome. With results published in 2005, this blueprint of a dog’s genetic material paved the path for today’s osteosarcoma project at the Broad Institute, funded by the AKC Canine Health Foundation.

Researchers have been working to collect sufficient number of cases and control dogs in the past few years. "We’re happy to report that we have analyzed 155 osteosarcoma cases and 120 controls (Greyhounds) with the latest genome-wide screening technology," she says. "The results look very promising with one major gene and several additional genes contributing to the disease."

The next step for Lindblad-Toh and her team will be to find the actual mutations and then developing DNA tests to detect dogs susceptible to osteosarcoma and dogs that may pass these genes on to offspring. This will allow owners and veterinarians to more closely follow dogs susceptible to tumors before possible life-threatening symptoms surface.

"For a major disease like cancer, the really fun part will come next year when we can start offering genetic testing," notes Lindblad-Toh. "Our hope over the next five years is to really understand how the different genes and gene combinations work together to cause this disease so we can customize treatments for specific disease genes, along with offering the best guidelines on when to test and what do to when you get the test results."

Since dogs and people are genetically similar, this research could also help humans. "We share around the same 20,000 genes and we live in the same environment to a large degree," notes Lindblad-Toh. "Osteosarcoma is a disease that behaves very similar in dogs and humans, which means there’s a very good chance of a drug having the same effect on both dogs and humans."

Meanwhile, Bult is focusing on enjoying quality time with Punch. "I’m going to do whatever I can to keep him comfortable and happy. He’s a happy dog right now. He went swimming yesterday, which helps keep his muscle tone up. Unless you know what you’re looking for, you wouldn’t even know he has cancer at this point."

For information about contributing a blood sample from a purebred dog for this research, visit the Broad Institute's website. "These samples are critical to be able to find these disease genes and mutations," says Lindblad-Toh. "We still need as many blood and tumor samples as possible because we have a lot more work to do to really understand the disease, in addition to just finding these genes. This research will give us a better understanding of the biology of this disease, allowing us to develop preventative measures and effective new treatments. We’re therefore very grateful to the dogs and pet owners who have helped us."