Fibrosis is scar tissue, and in pulmonary fibrosis the normal lung tissue is replaced by scar tissue, which leaves very little normal lung capacity for daily activities.  The underlying cause at this point in unclear, although it thought to represent inappropriate healing following lung injury.  The specific challenge is that pulmonary fibrosis is rarely if ever recognized at an early stage, where there may be more potential to reverse or slow the condition.  In people, it is recognized to run in families, and certainly a genetic component is suspected in dogs as well.  The similarities between pulmonary fibrosis in dogs and people are potentially exciting as the development of beneficial therapies may be applied to both species.

Clinical signs of pulmonary fibrosis include exercise intolerance, rapid respiratory rate and ultimately respiratory distress.  Affected dogs are often initially suspected of having either congestive heart failure or pneumonia, and the pulmonary fibrosis only detected after failure to improve for following therapy for either of those more common conditions.

Diagnosis of pulmonary fibrosis in dogs requires a degree of suspicion.  The clinical signs at first are often subtle and may be attributed to normal aging rather than appreciated as abnormal.  In fact, in one study, owners had noticed abnormalities for up to a year before diagnosis.  Physical examination findings classically include the presence of very loud “crackles” upon auscultation of the chest as well as a rapid respiratory rate and effort.  Dogs may also have a heart murmur.  Chest x-rays usually show a heavy interstitial pattern without signs of infection or heart failure.  Chronic bronchitis is another consideration in these dogs, although dogs with chronic bronchitis usually have a pronounced cough.  Further diagnostic testing may include bronchoscopy and cytological evaluation of the airways, or computed tomography (CT) of the chest.  Bronchoscopy is particularly useful to exclude chronic bronchitis.  CT scanning of the chest is considered the gold standard in people, and on-going work is occurring in dogs to try to determine the utility of this imaging modality in dogs as well.

Treatment to date has not been very rewarding, although some dogs appear to stabilize for some time on prednisone therapy as well as with treatment for other conditions, such as infection or Cushing’s disease.  Dogs often develop pulmonary hypertension, which is high blood pressure in the lungs due to the scar tissue in the lung tissue.  These dogs may be treated with Viagra®  (sildenafil) to help lower the lung pressures.  A number of therapies are in clinical trials in people and these may be applicable to dogs.  The average survival time following diagnosis is about a year, although some dogs live much longer, while others succumb to respiratory failure shortly after diagnosis. 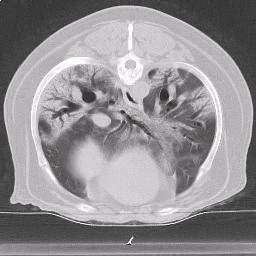 Example of a CT Scan from a dog with pulmonary fibrosis. 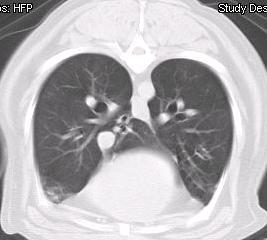 Example of a CT Scan from a normal dog