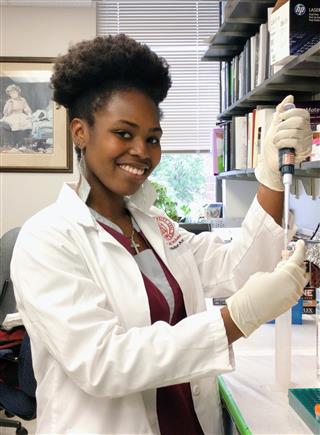 Dr. Gentry is currently studying renal dysplasia in Cairn terriers. The first part of her research analyzed hundreds of pedigrees of Cairn Terriers from across the U.S. and compared them with the results of renal ultrasound screenings to uncover any recognizable patterns of inheritance revealed by the data. She is currently collaborating with biostatisticians at the University of Pennsylvania to conduct genome-wide analyses in an attempt to uncover mutations in candidate genes that are significantly associated with renal dysplasia in Cairn terriers.

Ultimately, the goal of her study is to create a marker test so that the disorder can be diagnosed at an early age.  Such a test could be used not only to make informed breeding decisions, but also to effect lifestyle changes early on to either prolong life or prevent the signs of renal failure associated with renal dysplasia, therefore increasing overall quality of a dog's life.

Dr. Gentry’s mentor, Margret L. Casal, DVM, PhD, Diplomate ECAR, has received CHF-funding for her research in canine genetic disease and is also the advisor for the American Kennel Club/AKC Canine Health Foundation/Theriogenology Foundation Theriogenology Residency grants at the University of Pennsylvania. Read more about her CHF-funded grants:
01746-A: Discovery of the Genetic Cause of Lethal Acrodermatitis
02403-MOU: Microphthalmia and Delayed Growth Syndrome in the Portuguese Water Dog
01083-A: Exfoliative Cutaneous Lupus Erythematosus (Lupoid Dermatosis) in the German Shorthaired Pointer