At 16-and-a-half years of age, Morgan, an English Springer Spaniel, continues to lead a fairly active life. According to Katrene Johnson, Morgan’s handler, “She goes out to the barn with me several times every day, rambles with me and the other dogs on the trails once or twice a week, and still plays a little every day.  She’s a bit creakier and sleeps more deeply these days, but her dreams seem full of fun and adventures and the creakiness only slows her down a little. She’s still living a good life all in all and doing well.” 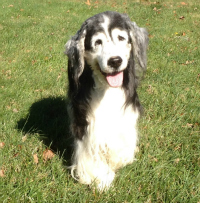 Morgan on a walk ~photo courtesy of Katrene Johnson

Morgan, who was deployed at the Staten Island Landfill in New York City in 2001, is one of three surviving dogs from a long-term medical surveillance study which has monitored the health and behavior of the search and rescue dogs deployed following the September 11, 2001 terrorist attacks. The study, led by Dr. Cindy Otto of the University of Pennsylvania and founder of the Penn Vet Working Dog Center, has been funded by the AKC Canine Health Foundation (CHF) since October 2001. Ninety-five search and rescue dogs deployed at the World Trade Center, the Staten Island Landfill and the Pentagon, and 55 non-deployed control search and rescue dogs have been enrolled in the study since its inception.

According to Dr. Otto, this is the first longitudinal study ever to monitor search and rescue dogs. “The ability to follow these dogs and document any health or behavioral effects of their heroic service is invaluable. The foresight of the AKC Canine Health Foundation is unparalleled. These surviving dogs really summarize much of our findings. The dogs on average have lived long and happy lives, a tribute to the relationship with their handlers, and the mental and physical activity that accompanied their careers in search and rescue,” said Dr. Otto. 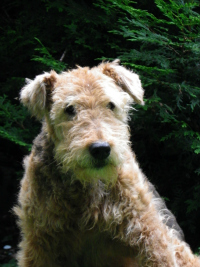 “Owning one of the last three dogs in this study is an incredible responsibility,” said Jean Seibert. Her dog Tookie, a 15-and-a-half year old Airedale Terrier, is part of the control group. “I am grateful to the AKC Canine Health Foundation for being at the forefront to support the research determining the effects the World Trade Center Collapse had upon the dogs serving during that disaster.”

Through annual examinations that include blood tests and chest radiographs, Dr. Otto has monitored the health of the deployed dogs compared to control dogs to determine if they have a higher incidence of long-term medical and/or behavioral problems. The study has also documented the cause of death in the deployed and control group dogs, and aims to determine if deployment contributes to any long-term health issues.

For the disaster search canine, certification includes proper command control, agility skills, a focused bark alert to indicate a live find, and a willingness to persist in the search for live victims, all in spite of possible extreme temperatures and animal, food, and noise distractions. The canine partners must also be confident enough to search independently, and must be able to negotiate slippery surfaces, balance on wobbly objects underneath their feet, and go through dark tunnels.

The team tests on two large rubble piles for an unknown number of victims, implementing all of their knowledge, skills, and abilities acquired from years of training. Teams that pass are some of the most highly trained canine resources in the country.

In the fall of 1999 Denise Corliss and her 8-week-old Golden Retriever, Bretagne, began training to become a certified search and rescue team.  In 2000 Corliss and Bretagne learned they had qualified as members of Texas Task Force 1. Their first deployment was the World Trade Center site following the 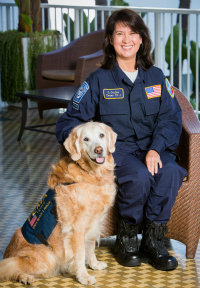 9/11 terrorist attacks. “After the attacks so many people wanted to do something. I was so honored that Bretagne and I were able to respond. It was a privilege to help,” said Corliss.

According to Corliss, Bretagne, now 16-years-old, is still very active, alert, and continues to serve her community.  “After her career as a search dog, Bretagne embarked on a new role as a reading therapy dog at local elementary school. She also stays busy with daily walks, swimming, and playing search games.  She is a happy Golden who still brings lots of love and joy to those around her.”

When the study first began, Dr. Otto and her team rigorously monitored the respiratory conditions of the deployed dogs. While there have been well documented studies of the chronic respiratory conditions that have plagued human responders, their canine companions, based on the ongoing monitoring supported through the CHF grant, have shown minimal respiratory problems. In fact, in preliminary analyses, there have been no systemic conditions that have been identified in the deployed search and rescue dogs that did not also occur in control search and rescue dogs.

“The dogs’ respiratory systems seem to have been able to cope with this horrible insult from the poor air quality, toxins, and pollutants to which they were exposed, and with no respiratory protection during the work that they did,” said Dr. Otto. “All of our evidence to date points to the fact that these dogs were incredibly resilient.”

In addition to utilizing data from the study to better understand respiratory disease, which has potential impacts for understanding and treating respiratory issues in both dogs and humans, long term data from the study are being used to determine the health impact of deployed search and rescue dogs. According to Dr. Otto, preliminary findings have not shown a significant difference in incidence of cancer or in the median age at death between the deployed dogs and control dogs. Insights from this long-term medical surveillance study provide vital information to handlers, trainers, and veterinary professionals on the health and well-being of dogs deployed on search and rescue missions.

“These three incredible dogs, an Airedale Terrier, a Golden Retriever, and an English Springer Spaniel represent the attributes we find so remarkable and treasure in all dogs – resilience, dedication, and an incredible giving spirit. The dogs in this study brought a nation hope in the face of terrible tragedy, and through this study have given far beyond their working years. CHF is particularly proud to have supported the entire fourteen-year course of this study, providing a tangible way for the Foundation and its supporters to truly honor these and other working dogs,” said Dr. Diane Brown, Chief Scientific Officer at CHF.

As geriatric dogs, Morgan, Tookie, and Bretagne have each slowed a bit, and they have some age-related health issues. Age, though, has not diminished their spirits. On a recent weekend, Seibert was surprised when Tookie snatched a loaf of bread off the counter. “At her age, I would have thought it to be impossible for her to achieve such a feat.”

For each of these dogs, it seems their sense of purpose remains strongly rooted in the search and rescue training that has become nearly instinctual.

In spite of her cataracts, Morgan’s eyes still sparkle when she realizes the treat door in the kitchen is open a crack. It’s become a game that keeps Morgan both mentally and physically active. If Morgan gives Johnson a re-find cue-- a search and rescue indication that the dog has located the subject -- Johnson gives her a treat.  “She’s a bit creaky dancing over to me but her meaning is clear! I follow as she takes me to the treat door.  She is deaf now so I dramatically mime surprise that the door is open and the creaky happy dance gets happier.  She gives her scratch indication that in the old days told me she had found what we were looking for.  Now it’s for that dog biscuit, but she is delighted that we can still hunt together and she can still explain things to me.”

Johnson is delighted too.  “I can’t see very well at those moments, either, but it’s because of the mistiness in my eyes watching this grand old dog, not cataracts.”

Editor's Note: It is with sadness we announce that since this article was first published Tookie and Morgan have passed away.

To read more on the impact of the 9/11 study, please see the article in Dog News beginning on page 77.