The highly anticipated 6th international conference on “Advances in Canine and Feline Genomics and Inherited Diseases” was held in Visby, Sweden from May 28-June 1 2012. This meeting brought together 160 researchers from 18 countries, and was made possible thanks to the generosity of Nestlé Purina. Overall, attendees were able to listen to 44 talks and view 42 posters that spanned the area of genomics research from evolution and behavior to specific diseases such as Addison’s disease and cancer. Four major shifts in our understanding of genetic disease are underway, due in part to our growing understanding of the complexity of genomic regulation of health and disease.

The first of these paradigm shifts is a growing awareness of the potential value of non-coding regions of DNA and an appreciation for the role they may play in disease pathogenesis. Coding sequences (i.e. those DNA sequences that code for a specific protein) are surrounded by DNA that does not encode a protein, but rather, serves as a potential regulatory region for genes to be turned on or turned off. New data from the Lindblad-Toh lab at The Broad/Uppsala University suggest these regions do matter and may confer susceptibility or risk for development of disease.

The second paradigm shift is the awareness that we must look at families of genes encoding related proteins rather than simply evaluating genes in isolation. This new insight is based on the fact that the proteins encoded by DNA often work together to regulate health and disease, and therefore it makes sense that multiple genes working together in a “pathway” may confer risk for disease. This “polygenic pathway analysis” approach has yielded new and exciting insight into the molecular pathogenesis of lymphoma and hemangiosarcoma. In research conducted by the Linblad-Toh, Breen and Modiano team, molecular pathways defining cellular proliferation (i.e. the uncontrolled replication of cancer cells) and cell death are coming together to define a distinct signature for disease risk.

The third shift is a growing awareness of the role that gene copy number variants may play in disease. In certain diseases it may not be a genetic mutation that confers disease risk, but rather, the number of gene copies present in an individual. An excellent example is Shar-Pei fever conferred by multiple copies of the HAS2 gene. We expect gene copy number variant to emerge as a risk factor in other disorders as well.

And finally, the forth concept repeatedly mentioned was that as gene therapy becomes more of a reality, naturally occurring disease in the dog is likely to become the most rigorous and relevant model for blazing new trails in the treatment of genetically-based human disease. Some of these topics were recently covered in AKC Canine Health Foundation podcasts during Pet Cancer Awareness month (Hemangiosarcoma Research with Dr. Jaime Modiano and Osteosarcoma Research with Dr. Kirsten Lindblad-Toh) and you can expect more to come from the AKC Canine Health Foundation on specific advances in the months to come.

After 5 wonderful days of science many participants moved on to a more political discussion: “The Dog Health Workshop” hosted by the Swedish Kennel Club in Stockholm, Sweden. This meeting was again funded by Nestle Purina and brought together many of the major international groups dedicated to the health and wellbeing of dogs. Organized by the impressive Dr. Åke Hedhammar of the Swedish University of Agricultural Sciences, the intent of this workshop was to bring attention to and awareness of health problems in 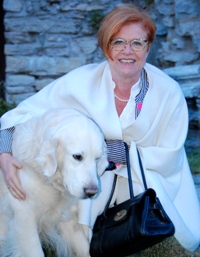 Irene Cecilia Schelin Seidegård is a Swedish biochemist and Governor of Gotland County, Sweden. She was in attendance at the conference with her dog.

pedigree dogs. On an international level, the hope of the organizers is to begin collaborative efforts to deal with existing and future issues influencing the health and well-being of dogs. There is no doubt that strong opinions and passion will make these conversations intense, but the AKC Canine Health Foundation looks forward to being an active participant on the International Panel and to continuing the conversation about the health and wellbeing of dogs.