The Complex Genetics of Diabetes Mellitus in Australian Terriers

Dogs can suffer from diabetes mellitus, which resembles Type I or insulin-dependent diabetes in humans. In this condition, the pancreas does not make any insulin, the hormone needed to move sugar from the bloodstream into the body’s cells that use it as fuel. Insulin must be given as treatment for the body to function. Since certain purebred dogs have a higher risk of developing diabetes mellitus, it seems that genetics play some role in the development of this disease. For example, Samoyeds are 12 times more likely and Australian Terriers are 32 times more likely to develop diabetes mellitus than mixed breed dogs in the United States.1 If we can identify the genetic variations associated with diabetes mellitus, we can identify the dogs at higher risk for developing this disease. This allows initiation of preventive strategies in these high-risk dogs and guides breeding decisions to decrease the incidence of this disease. 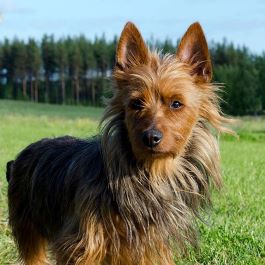 The AKC Canine Health Foundation (CHF) funded research to explore the genetics underlying diabetes mellitus in dogs with Grant 610: Evaluation of Genetic Markers for Diabetes Mellitus in Samoyed and Australian Terrier Dogs. Working with national and regional breed clubs, investigators at the University of Pennsylvania examined variations in the insulin gene among Samoyeds and Australian Terriers with and without diabetes mellitus. The insulin gene is associated with several types of human diabetes. In dogs, it is located on chromosome 18 and has been studied in several other dog breeds. Results recently published in the Journal of Heredity showed that at least one gene in the insulin gene region is associated with clinical diabetes mellitus in Samoyeds and Australian Terriers.1 The fact that the same gene region is associated with disease in two very different dog breeds indicates that the mutation occurred well before the development of modern breeds, or that the change occurred independently in each of the different breeds.

These results demonstrate that canine diabetes mellitus is a complex disease influenced by many factors including multiple genetic mutations, environment, and more. Additional study will continue to refine our understanding of the specific genes involved in diabetes, always with the goal of preventing or minimizing disease impact in dogs. Learn about CHF’s research on diabetes mellitus and more at akcchf.org/research and support canine health research so that all dogs can live longer, healthier lives.