SPOTlight on Dr. Garvin, Chairman of the AKC Canine Health Foundation Board of Directors 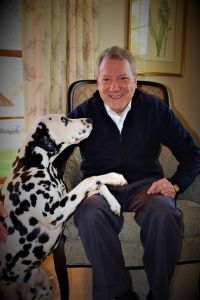 Dr. J. Charles Garvin has been a member of the AKC Canine Health Foundation (CHF) Board of Directors since 2007 and has served as Board Chairman for the past five years.  He is in his eighteenth year on the Board of Directors of the American Kennel Club. Previously serving as President for 14 years, he is now Vice President and AKC Delegate for the Dalmatian Club of America, also sitting on the Board of Directors for the Dalmatian Club of America Foundation since its inception in 1995. Dr. Garvin is President of the Marion Ohio Kennel Club, Inc. and has been training, showing, and breeding Dalmatians throughout most of his life. His passion and dedication to excellence are an asset to the AKC Canine Health Foundation and its mission to advance the health of all dogs.

Dr. Garvin grew up in Ohio with three older sisters in a family that always had dogs. As a teenager, he chose a Dalmatian as his own dog to train in obedience. Not only did the pair earn a Companion Dog title, but they also did well in the conformation ring as the top winning female Dalmatian in the United States for five consecutive years. The duo also achieved national success when Charles won the Junior Showmanship Finals at the Westminster Kennel Club Dog Show at the age of seventeen! 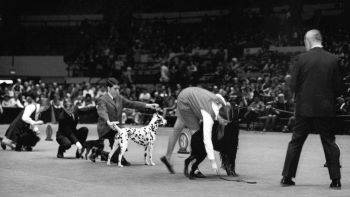 Dr. Garvin’s parents built on the family’s success with Dalmatians and focused on breeding and raising quality show dogs and family companions under the Korcula kennel name. Sharing their son’s dedication to excellence, they also became active in the Dalmatian Club of America and local kennel clubs to advocate for dogs, their owners, and their chosen breed.

Dr. Garvin attended the University of Southern California School of Medicine, completed a one-year surgical internship at Huntington Memorial Hospital in Pasadena, CA, and then returned to Ohio to complete his residency in ophthalmology at the Ohio State University. As a board-certified ophthalmologist and Fellow of the American College of Surgeons, Dr. Garvin started his medical career as a comprehensive ophthalmologist at a multispecialty group practice in Ohio and has remained there for almost forty years. While serving as President and Medical Director for 25 years, he helped the practice grow from 35 to 75 physicians.

It was during medical school that Dr. Garvin used the university’s extensive medical library to research Dalmatian health concerns and appreciated the knowledge contributed by a variety of canine health researchers. In 2007, Dr. Garvin was asked to join the CHF Board of Directors. He has served on the Foundation’s Scientific Review Committee for ten years and has been Chairman of the Board for five years, leading the staff and directors in their ongoing efforts to advance the health of all dogs. 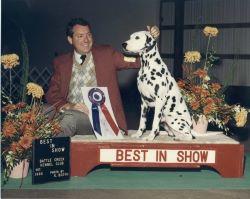 Dr. Garvin has continued to show and breed Dalmatians throughout his education and professional career. Once he returned to Ohio as an adult, he earned his AKC judging license and became approved to judge Dalmatians and Junior Showmanship. His kennel has produced over ninety champions and some of the top winning and producing Dalmatians in breed history.

Dr. Garvin’s experiences as a physician, dog breeder, and fancier enable him to promote CHF’s past successes and future goals. “CHF is in a unique position to bring together dog owners and researchers to facilitate progress in advancing our canine health knowledge,” Dr. Garvin states. “The Foundation is leading the way to improve the long-term health of all dogs through our infrastructure and oversight which keep researchers accountable and help individual donors and clubs invest with confidence.” Dr. Garvin is particularly proud of CHF’s involvement in creating the Canine Health Information Center (CHIC) which has improved the efficiency of canine health research by providing a repository of DNA samples for scientific study. As an ophthalmologist, he is particularly appreciative of the CHF-funded research that identified the genetic mutation underlying stationary night blindness in Briards, which is the same genetic defect that causes Leber’s Congenital Amaurosis blindness in human children. Outcomes from this research actually helped dogs regain their sight and led to the first gene therapy treatment approved in human medicine. Finally, Dr. Garvin is grateful for continued support from the dog community and the public at large as we work toward better health for all dogs. He notes, “We cannot do it without them.”

Thank you, Dr. Garvin, for your outstanding commitment and leadership at the AKC Canine Health Foundation!