Dogs enrich our lives in many ways. Working dogs, in particular, perform various tasks to assist humans. Guide dogs, service dogs, hearing dogs, and dogs that detect seizures, cancer, drugs, or explosives are some of the dogs carefully bred and trained to lend their canine talents to improve our lives and keep us safe. Extensive resources are invested to breed, raise, and train these dogs, but success rates from training programs are reportedly only 35-50%. Much attention and research are currently directed at improving this success rate to reduce expenses, decrease the waiting period for obtaining a service dog, and meet the growing demand for American-bred detection dogs. With research supported by the AKC Canine Health Foundation (CHF) and its donors, investigators are exploring the temperamental traits and cognitive skills that determine a successful working dog.

Temperament is defined as an animal’s nature or behaviors that are relatively independent from learning, values, and attitudes. In contrast, cognition is the ability to assimilate information obtained from thought, experience, and the senses into knowledge and understanding. In his 2018 publication1, CHF-funded researcher Dr. Evan MacLean describes the difference like this: We can train a dog to pick up a set of keys, but what if those keys are on the floor and partially covered by a book? What if the closest door to the room where the keys are located is closed? He notes that cognitive flexibility is what allows dogs to solve these problems. Dr. MacLean started researching the cognitive skills that predict a successful working dog while he completed a post-doctoral fellowship and worked as co-director of the Duke Canine Cognition Center at Duke University in Durham, NC.  Alongside post-doctoral fellow, Dr. Emily Bray, their CHF-funded research continues through the University of Arizona Canine Cognition Center. Their results show great promise in improving our understanding of working dog success.

With CHF Grant 01995: Understanding the Flexibility and Limitations of How Dogs Acquire Knowledge and Understanding: Application to Service Dog Emotional Health and Selection, Dr. MacLean and his team explored how selecting for a more placid temperament in service dogs might affect cognitive performance (an example of the emotional-reactivity hypothesis). They compared the performance of pet dogs and service dogs on a problem-solving task (going around a clear barrier to reach the experimenter with a food reward). Using tail-wagging rate to indicate arousal, the baseline arousal of pet dogs was higher than that of service dogs. When arousal level was increased by verbal encouragement, results followed the Yerkes-Dodson Law, which states that performance increases with physiological or mental arousal, but only up to a point (figure 1).

These findings demonstrate that selection for temperament can influence problem-solving abilities and may inform such processes in working dog populations. Can We Predict Success?

Numerous studies, like the one just described, have demonstrated strong associations between various behavioral and temperamental traits and training outcomes. However, working dog breeders, trainers and providers need a way to accurately predict the success or failure of dogs in their respective programs. Predictive tools would allow them to focus resources on a subset of dog candidates that are most likely to achieve success.

CHF-funded researchers examined the accuracy of cognitive skills testing in predicting a dog’s ability to help humans. They completed cognitive tests designed to assess skills for reasoning about the social and physical world, as well as general cognitive processes, on service dog candidates being trained through Canine Companions for Independence in California, explosive detection dogs being trained at K2 Solutions, Inc. in North Carolina, and volunteer pet dogs from North Carolina.

After identifying a subset of tasks that were associated with success as a service or detection dog, they administered these sub-tests to new groups of service and detection dogs.

In another study, CHF-funded researchers examined the potential of two existing tools, the Canine Behavioral Assessment & Research Questionnaire (C-BARQ®) and In-For-Training test (IFT - a standardized temperament test used by Canine Companions for Independence) – both individually and in combination, to predict success as a service dog. Results, recently published in Frontiers in Veterinary Science3, showed that each individual test was most accurate in identifying the 20% of dogs least likely to succeed (defined as placement as a service dog for at least one year). The accuracy in identifying these likely unsuccessful dogs improved when data from both questionnaires was combined. Investigators note that these results are reasonable since CBARQ and IFT were primarily designed to identify problem behaviors.

Additional research is needed, but these promising results indicate that behavioral and cognitive testing may be helpful to refine the pool of working dog candidates that progress through each phase of training. Of course, it will be up to each individual service or working dog organization to evaluate these new tools and determine the acceptable risks and return on investment for their unique goals.

Researchers note that results from these studies support the fact that individual differences in canine cognition are explained by several factors, and not likely due to a set level of general intelligence. This mirrors what has been learned in humans - that there is not one single type of intelligence, but that different skills contribute to success in different situations. The practical application of this is the fact that the work of a guide dog is different from that of an explosives detection dog or a dog that works in the courtroom. We can therefore understand that different cognitive skills are needed for success in each of these roles. CHF, along with its donors and funded researchers, is committed to learning more about these different skills and cognitive abilities required to achieve success. 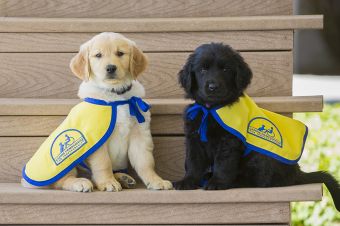 The most recent CHF-awarded grant to study working dogs will look even earlier in a dog’s life to determine what developmental factors affect success. With funding from CHF Grant 02518: The Effects of Early Life Experience on Working Dog Temperament and Cognition, researchers are examining the effects of the dam’s temperament and the environment during the first eight weeks of life on working dog success. Studying dogs bred, raised, and trained by Canine Companions for Independence, they seek to understand how differences in the early environment affect working dog development, how much temperament and neuroendocrine profiles predict maternal style, and how we can optimize early life processes to promote the healthy development of various working dogs. This potentially groundbreaking study will improve our ability to understand and influence the early life environment of puppies and identify and train dogs with the greatest potential for success in service work, while taking steps to understand and address the dog’s emotional health and well-being during the selection process.

An integrative approach that considers canine temperamental traits, cognitive traits, and their interactions is needed to understand working dog success. Predictive tools that help working dog providers focus resources on breeding and training dogs with a greater chance of success will improve outcomes for the organization and ultimately the dogs, whether they go on to work or are placed in pet homes.

CHF is dedicated to improving the health of all dogs and their people, including working dogs and the individuals they serve. Improving our ability to breed, raise, and train working dogs to achieve success and well-being will only strengthen the unique bond between our two species.