“The first litter of Great Pyrenees I ever bred produced a dwarf,” recalls Peggy Watson. “I had heard of dwarfs in this breed, but they were surrounded by lots of negative inuendo. Fellow breeders said the dwarf would be in pain, would not survive, and should be euthanized. But I saw a bold and happy puppy that could be a great obedience competitor. So I decided to raise her and train her.” That dwarf was a female that Peggy named Willow. She went on to earn her Companion Dog (CD) obedience title and lived a long and healthy life before she died of suspected cancer unrelated to her dwarfism. “I learned a lot from Willow,” Peggy says. “I was forced to learn a lot about genetics, and it turned into a wonderful education which has made me a better breeder.” 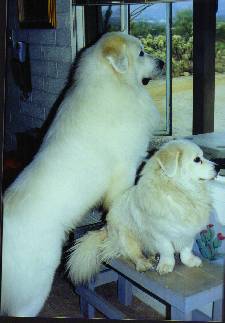 Dwarfism in the Great Pyrenees was first described in the early 1990’s. Affected dogs appear normal at birth, but within two weeks are noticeably shorter and smaller than their littermates. While a normal adult Great Pyrenees can stand 25-32” at the withers and weigh 85-100 pounds, adult dwarfs are only 13-18” at the withers and weigh 35-50 pounds. Affected dogs often experience hearing loss and require frequent dental cleanings due to crowding of the teeth in their shortened jaw. Both males and females are equally affected. Dwarfism in the Great Pyrenees is not caused by a hormonal imbalance as seen in other dog breeds.

To understand this unique condition, the Great Pyrenees Club of America collaborated with the AKC Canine Health Foundation (CHF) to explore the genetics underlying dwarfism in their breed. With funding managed through CHF Grant 02400-MOU: Basis of Dwarfism in Great Pyrenees, investigators at the University of Minnesota identified the genetic mutation responsible for dwarfism in this breed. They also confirmed that the disorder has a simple autosomal recessive mode of inheritance – meaning that a dog must have TWO copies of the mutation (one from each parent) to be affected. A DNA test for this mutation is now available through the University of Minnesota Canine Genetics Lab.

The new DNA test identifies individual dogs as clear, carrier, or affected for the dwarfism mutation. The University of Minnesota Canine Genetics Lab also provides instructions on how to interpret the results – describing how thoughtful use of carrier animals can help preserve genetic diversity in the breed without producing affected dogs.

Breeders like Peggy are relieved to have a DNA test for dwarfism in the Great Pyrenees. “Now we have clear, factual information about dwarfism and how it is passed on,” she says.

Chair of the Great Pyrenees Club of America Health Committee, Flo Laicher, says that “In the past, a dog that produced a dwarf was removed from the breeding pool. We lost a lot of genetic material and genetic diversity that way. Now that we have a reliable test for the mutation that causes dwarfism, people are willing to pay more attention to the disorder. Breeders can manage their breeding plans to avoid producing dwarfs, but without losing genetic material valuable to our breed.”

“Hopefully people will be less afraid of dwarfism in the Great Pyrenees now that we have this test,” Peggy says. “Breeders can work with bloodlines that carry this gene in a smart way and not lose their genetic material.”

As the world’s largest funder of health research focused solely on dogs, the AKC Canine Health Foundation and its donors have invested in research resulting in DNA tests for several genetic disorders in dogs – include stationary night blindness in Briards, cystinuria in Newfoundlands, copper toxicosis in Bedlington Terriers, and more. In collaboration with breed clubs, veterinary professionals, and dog lovers, CHF works to better understand health conditions that affect specific breeds and all dogs.

“While the Great Pyrenees Club of America has a large and dedicated Health Committee, we are all volunteers,” Flo says. “We worked with CHF because they have the staff, time, and infrastructure to ensure that the research we supported was carried out as planned.”

This new test for the mutation causing dwarfism in the Great Pyrenees is only the latest achievement in CHF’s work to prevent, treat and cure canine disease. Learn more about CHF’s work and impact on canine health at akcchf.org/research.