Lysosomal storage diseases are rare inherited metabolic disorders that result in cellular dysfunction. One type of lysosomal storage disease, mucopolysaccharidosis type VI (MPS VI), is caused by a deficiency of the arylsulfatase B (ARSB) enzyme. This enzyme is responsible for breaking down large sugar molecules known as glycosaminoglycans in the recycling centers (lysosomes) of cells. Insufficient ARSB activity causes glycosaminoglycans to build up within the cells, preventing normal function and eventually causing cell death. MPS VI has been identified in humans, dogs, cats, and rodents. Clinical signs in dogs include retarded growth, progressive corneal cloudiness, and skeletal deformities. Affected dogs require intensive nursing care and are often euthanized at a young age due to progressive disease.

Larry Dewey, Board member and Head of the Health & Research Committee for the Miniature Pinscher Club of America remembers the challenges dog owners faced before this disease was recognized. He states “Before MPS VI was a named disease, affected Miniature Pinschers were seen with stunted growth and skeletal abnormalities, mostly involving the hips, in which they were misdiagnosed as having hip dysplasia or femoral head necrosis.”

MPS VI is more common in Miniature Pinschers, Miniature Schnauzers, Welsh Corgis, and Chesapeake Bay Retrievers. It has an autosomal recessive mode of inheritance, meaning that a dog must have two copies of the underlying abnormal gene to be affected. To further define the genetic mutation(s) that cause MPS VI, AKC Canine Health Foundation (CHF) funded investigators analyzed DNA in the area that codes for the ARSB gene in three affected Miniature Pinschers and three affected Miniature Schnauzers. Comparing these DNA sequences to those of unaffected dogs identified specific mutations responsible for the disease in these breeds. 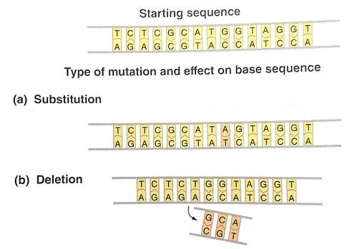 Figure 1: Examples of a substitution or missense mutation and a deletion mutation. (Adapted from Wikimedia Commons, author Hullo97)

Individual cases of MPS VI and the underlying mutation have also been documented in a Miniature/Toy Poodle and a Great Dane. So, there are now four known, breed-specific genetic mutations that cause MPS VI in dogs. While the mutations are rare in Poodles, Great Danes, and Miniature Schnauzers, the causative mutation in Miniature Pinschers is common enough that regular screening should be considered prior to breeding. Understanding a dog’s collection of genes, or genotype, for this devastating disease will allow breeders to avoid mating pairs that produce affected offspring. Now, not only do breeders and members of the Miniature Pinscher Club of America, like Mr. Dewey, have a tool to make informed breeding decisions but they are a critical part of investing and creating a healthier future for their breed. Furthermore, since many of the identified mutations in dogs correlate with similar mutations in humans affected by MPS VI, anything we learn about this disease has the potential to benefit both species.

CHF and its donors remain committed to exploring the complex causes of disease in dogs, including genetic mutations. Learn more about this important work at akcchf.org/research.