Ann Viklund joined the AKC Canine Health Foundation (CHF) Board of Directors in 2013 and has served as its Secretary for the past five years. She received CHF’s President’s Award in 2017 honoring her exceptional contribution to advancing canine health. She is the Director of Conformation for the Purina Professional Engagement Team and serves as a valued liaison between these two organizations working to improve the health of all dogs. She is also on the Board of Directors of the Kennel Club of Philadelphia and takes great pride in working with multiple organizations that invest in canine health. 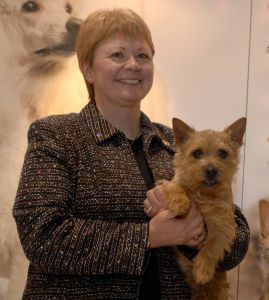 Ann’s love for animals became a career in college when she was employed as a groom for Thoroughbred racehorses. She worked her way up as a trainer and eventually became the one of the first women to work as a Steward in the horse racing industry.  She married a fellow racing official who eventually moved into training gun dogs to compete in hunting tests and as hunting companions. The couple became more serious about their dog training, competing, and breeding and worked with well-known Labrador Retriever breeder Mary Howley of Candlewood Kennels in establishing their breeding program. They kept a puppy from the first litter they bred in 1990 and became more involved in their local retriever clubs.

As the training business and kennel continued to grow, Ann was hired at Purina when the company expanded their partnership with dog show enthusiasts. If she was going to work with the conformation community, Ann wanted to be involved in their sport. Ann started showing her Labrador Retrievers in the conformation ring and remembers that she “loved the field game more than the conformation game. So, she mostly got to work with my husband in the field.” Since Ann’s career required frequent travel, she began looking for a smaller breed that could easily join her on work trips. A Norwich Terrier caught her eye at an all-breed show, and she knew that was the breed for her. “I enjoy the breed’s social nature and companionship,” Viklund says about Norwich Terriers. Ann’s husband has retired from professional gun dog training, and their current pack is enjoying the senior life, but Ann continues to advocate for canine health in her work for Purina and CHF.

Ann attended the first AKC Canine Health Foundation National Parent Club Canine Health Conference in 1997 as a representative for Purina. “The relationship between Purina and CHF was natural from the start,” she notes. “CHF is the only organization focused solely on health research to benefit dogs. However, these research outcomes can also be applied to humans. The One Health aspect of the work is amazing!” Viklund states. “The presentations on CHF-funded research related to vaccinations were eye-opening, directly changed vaccination protocols in the clinic, and had such a broad application for all dogs.” Since then, she has championed research into canine epilepsy, diabetes, cancer, and more. “I lost my heart dog to cancer,” Viklund says. “Canine cancer treatment protocols have improved drastically over the past 20 years, thanks to research funded by organizations such as CHF.”

Ann knows that CHF funds only the highest quality research and continuously monitors the progress of that research. Updates are shared with sponsors and clubs that have invested in the science. She cites the high charity ratings and tightly run organization of CHF as evidence of the Foundation’s value to canine health and proof that donations go directly into research. Viklund says, “That research has the potential to improve the lives of all dogs and therefore improve the lives of the people that love and care for those dogs!” Thanks to dedicated animal lovers like Ann Viklund, quality research is advancing the health of all dogs and their owners.