The President's Award is given each year to a person or organization who "has made an exceptional contribution to advancing canine health." The Chairman of the AKC Canine Health Foundation Board of Directors selects the person who receives this award and it is presented at an event dedicated to canine health. 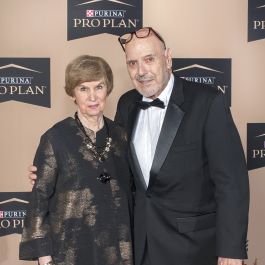 Duane and Connie Butherus have devoted more than 50 years to dogs. From showing prize-winning Afghan Hounds to serving as officers for many clubs, they are dedicated to advancing the health and well-being of dogs. Duane is currently on CHF’s Board of Directors and served as Chairman of the Board from 2013 to 2015. He is also currently a member of CHF’s Scientific Review Committee. Connie is the past president of the Afghan Hound Club of America, Afghan Hound Club of Northern New Jersey, and Central New Jersey Hound Association. In addition, she is a current member of the Kennel Club of Philadelphia, Morris & Essex Kennel Club, Tuxedo Park Kennel Club, and Delaware Gap Kennel Club. 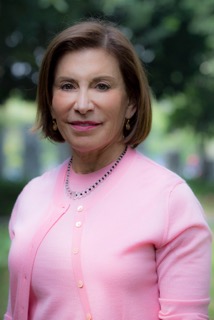 Cindy Vogels has served on the CHF Board of Directors for sixteen years, has been its treasurer since 2011, and previously served as Board Chairman from 2008-2011. CHF Board Chairman, J. Charles Garvin, MD says, “We are honored to recognize Mrs. Vogels for her remarkable work for CHF over the many years as Chairman, Treasurer, committee member, and board member. Her dedication, talent and perseverance have been instrumental in the growth and success of our organization.” 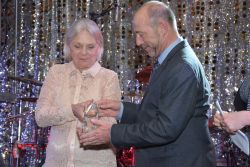 The Orthopedic Foundation for Animals (OFA) has generously supported CHF research on numerous canine health topics including musculoskeletal disease, thyroid disease, genetics, oncology, neurology, and the education of Clinician-Scientists in canine health research. CHF and OFA co-sponsored creation of the Canine Health Information Center (CHIC), which includes a database used to research and maintain information on the health issues prevalent in specific breeds and a DNA repository to facilitate research aimed at reducing the incidence of inherited disease in dogs. Since 2009, OFA has co-sponsored the Veterinary Student Scholarship Program, which provides funds for students from US schools of veterinary medicine to attend CHF’s biennial National Parent Club Canine Health Conference. In 2018, they generously supported CHF’s Clinician-Scientist Fellowship Program,  surpassing a milestone of cumulative giving of over $500,000.

In 1995, the American Kennel Club (AKC) founded CHF to advance canine health research. The AKC’s cumulative investment of nearly $24 million in financial support to further the mission of CHF includes office space and other in-kind services to keep operating expenses low, and helps maximize the dollars CHF puts toward research. In 2016, the AKC made a commitment to CHF’s Tick-Borne Disease Initiative, matching contributions to $250,000 to help further research in this important area. Additionally, they continued the Donor Match Challenge Program, matching $500,000 of contributions from new and lapsed donors 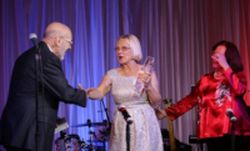 Bobby Christiansen, president of MB-F, a leading business in producing and managing dog shows. Star Dogs, begun in 2000, allows people entering dog shows to add a $1.00 donation to their entry fee to benefit the AKC Canine Health Foundation. According to CHF Chairman Dr. A. Duane Butherus, "The longstanding support from Bobby and MB-F has helped CHF spread its mission to help all dogs live longer, healthier lives. Not only does the Star Dogs program introduce people new to dog shows to the great work CHF is doing, but it also serves as a corporate model to others, emphasizing the importance of giving back." In addition to the Star Dogs program, MB-F supports the Foundation events through their popular infodog.com website and provides other marketing resources as in-kind donations.

Mr. James T. Stevens is the recipient of the 2012 AKC Canine Health Foundation President’s Award. Lee Arnold, chairman of the AKC Canine Health Foundation, made the announcement at the December 2012 board meeting, stating, “Jim has been an ardent supporter of CHF, and his tenure on the board has benefited the Foundation by implementing sound fiscal policies so that we can continue to advance our mission to help dogs live longer, healthier lives.” Stevens was the Chief Financial Officer at the American Kennel Club for 10 years before retiring in the fall of 2012. From 2002 to 2007 Stevens served CHF as a financial advisor in an informal capacity, before being elected to the CHF board in 2007 and serving five years.

“It is an honor to present Terence Block with this prestigious award,” Arnold says. “Throughout his career, Mr. Block has continued to demonstrate his commitment to canine health research and the companion animal industry. We pause to recognize his efforts and celebrate his contributions.” Block, who joined Nestlé Purina PetCare Company (formerly Ralston Purina Company) in 1977, retired in 2011.

Presented at the "Gala by the Bay" in Long Beach California, Chairman, Cindy Vogels said, “Each year it is the privilege of the Chairman to select the recipient of the President’s Award. This year I am delighted to honor two individuals who have given generously and selflessly for years.”  She continued, “They have contributed, not only monetarily – often anonymously – but have also devoted their energies, intelligence and spirit – helping engage others in our quest. From the bottom of my heart, my thanks to Bill and Tina Truesdale.”

The Award was presented at the “Gala by the Bay” in Long Beach, California.  Upon presentation at the Foundation’s signature fundraising event, Chairman Cindy Vogels noted, “In their quiet, unassuming way, JoAnn and Roy have made enormous contributions to CHF.”  She continued, “In addition to extraordinary financial bequests, they also lent their tremendous business expertise to the Foundation.”

The Award was presented at the “Gala by the Bay” in Long Beach, California by Chairman Cindy Vogels.  The Bernese Mountain Dog Club of America has been a model in demonstrating a commitment to conquering the diseases which threaten our dogs.  Always generous contributors, the Berner community made an enormous effort in 2008, raising nearly $80,000 for Bernese Mountain Dog health. 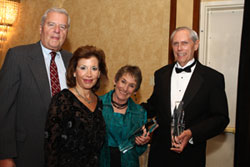 The Award was presented at the “Gala by the Bay” in Long Beach, CA.  Acting President of CHF Cindy Vogels noted, “For many years, the Golden Retriever Club of America and the Golden Retriever Foundation have been enthusiastic and generous supporters of the AKC Canine Health Foundation.  Members of the club have supported over 40 research grants in topics including diabetes, hemophilia, hemangiosarcoma, canine brain tumors, and osteosarcoma among many others.”  Vogels continued, “Golden Retriever owners continually spread the news and story of CHF.  They work tirelessly to raise awareness and the funds necessary to support the research leading to the breakthroughs and discoveries that amaze us each and every day.”

Presented at the 6thAnnual “Gala by the Bay” in Long Beach, CA the President’s Award was bestowed upon the Orthopedic Foundation for Animals for their years of dedicated support to the AKC Canine Health Foundation.  Then-CHF President Wayne Ferguson commented, "For forty years the Orthopedic Foundation for Animals has worked to improve the health and well being of companion animals through a reduction in the incidence of genetic disease. For ten of those years, the OFA has, through its unparalleled generosity, become not only a supporter of the AKC Canine Health Foundation, but a true, partnering friend."

Dennis Sprung, President and CEO of the AKC accepted the award on the first evening of the 2005 National Parent Club Canine Health Conference in St. Louis, sponsored jointly by Nestlé Purina PetCare Company and the American Kennel Club.

CHF President Wayne Ferguson noted, “The AKC launched the Foundation in 1995 with a $1.6 million donation.”  He continued, “The 2004-2005 Endowment Challenge proves the AKC wishes to continue this robust alliance.  When we raise the remaining $25,000 toward the challenge, our endowment will have increased $1.5 million in funds that will support the Foundation in perpetuity – giving us the underpinning we need to direct more of what we raise to canine health research.”

Tina Truesdale accepted the award on behalf of her husband, ABCF President Dr. William Truesdale, at the Charity Ball, sponsored by Nestlé Purina and held in conjunction with the International Kennel Club Cluster of Dog Shows in Chicago.

“This Foundation has funded a remarkable 17 grants aimed at finding answers to many of the diseases that strike Boxers and so many other breeds; diseases like cancer, cardiac disease and thyroid disease”, John Studebaker, then-President of CHF noted. “Over the past nine years this group of devoted dog fanciers has contributed over $317,000 to canine health research. This sets a sterling example to breed clubs across the country.”

Because club members contributed so much to this achievement, Studebaker said, a second President’s Award presentation was made at the American Boxer Club National Dog Show in May of 2003.

We extend our deep appreciation to a company that has proven its dedication to canine health, both by supporting projects of the Foundation and by developing new programs such as the Parent Club Partnership Program, to further the Foundation’s mission.

Tom Crowe, Founder of MB-F, Inc., was honored in a surprise presentation at "A Night To Remember," a gala fundraiser held on the eve of the AKC/Eukanuba American Dog Classic in Orlando. Mr. Crowe was honored for his dedication to the sport of dogs and the future of canine health. He has been a dog show superintendent for more than 40 years and active in the dog fancy for more than 50 years. He holds a Doctorate in Medicine, but dogs and shows have kept him far too busy and have yet to let him stray from the calling of the dog world. He has been a professional handler, and he held a pilot's license from 1938 until just recently. He continually keeps himself and his business up-to-date with the latest computer technology, and he resides in Melbourne, Florida, with his wife Lois and their Toy Poodle, T.J. Fuzzie.

Lou Auslander, President of the International Kennel Club, was honored at the Ralston Purina Charity Ball the evening of February 24 during the IKC weekend of dog shows in Chicago. His many years of work with dogs and dog clubs has always included the utmost concern for canine health, and, as Charity Ball Co-Chair Lee Arnold explained, "There is no one more respected, no one more admired, and no one more committed to receive this very prestigious award. This was a unique honor bestowed upon a man who is more than well-deserving of it."

Elaine Ostrander, PhD received the President's Award at the AKC Canine Health Foundation National Parent Club Canine Health Conference in St. Louis the weekend of October 15-17, 1999. Her work on the canine genome map has greatly helped to advance canine health research by providing researchers with a valuable tool to discover the genetic causes of canine diseases. Dr. Ostrander is also an excellent speaker, and she provided the conference attendees with a practical and easy to understand view of the map.

Bruce Korson received the President's Award at the Ralston Purina Charity Ball the evening of February 26 during the International Kennel Club weekend of dog shows in Chicago. Korson was recognized for his work in developing several influential projects as a Director of the AKC Canine Health Foundation, including the making of the first video and the establishment of the President's Council which has grown to over 140 members in 35 states.