Developing More Accurate Tests for the Diagnosis of Canine Hypothyroidism

Canine hypothyroidism is a common endocrine disease that results in symptoms such as lethargy, weight gain, and skin and coat problems due to decreased thyroid hormone production. It is seen in medium to large-size dogs of both sexes and is usually diagnosed between 4-10 years of age. Thyroid hormone secretion is regulated by a negative feedback control system in the hypothalamic-pituitary-thyroid axis (Figure 1), meaning that hormone production is decreased when its bloodstream concentration reaches a certain threshold. 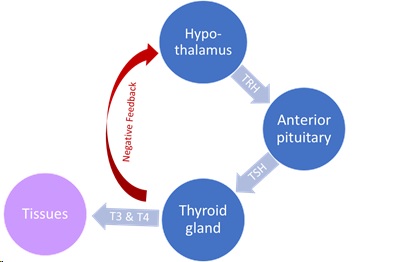 Despite numerous testing options, accurate diagnosis of hypothyroidism is challenging. Scintigraphy (using radioactive dye to highlight thyroid tissue function) and TSH response tests are accurate but expensive methods for definitive diagnosis. Biopsy and histopathology are invasive, and the presence of a lesion does not always mean that organ function is compromised. The presence of thyroglobulin auto-antibodies (TGAA) in canine hypothyroidism is inconsistent. TT4 levels can be affected by certain drugs and non-thyroid illness. FT4 testing is more specific than TT4 testing, but not as sensitive, meaning there is a greater chance for false negative results.

Commonly, a low T4 along with elevated TSH confirms a diagnosis of hypothyroidism. However, 30-40% of hypothyroid dogs have a normal TSH level. CHF-funded researchers at the University of Utrecht in the Netherlands searched for a way to accurately diagnose these dogs and differentiate them from dogs with non-thyroid illness. The goal of CHF grant 02138: Development of Accurate Diagnostic Tests for Canine Hypothyroidism was to investigate new and more accurate methods to diagnose canine hypothyroidism.

The first method explored and reported in the Journal of Veterinary Internal Medicine1 was a TRH stimulation test. Instead of measuring TT4, which shows an inconsistent response to TRH administration, researchers measured TSH and Growth Hormone (GH) before and after a dog was given a dose of TRH (Figure 2). In a cohort of 21 dogs (11 with confirmed hypothyroidism and 10 with non-thyroid illness) with low TT4 and normal TSH, median basal GH levels were significantly higher in the hypothyroid dogs. After TRH administration, TSH remained unchanged in hypothyroid dogs, but was significantly increased in the normal dogs.

This study demonstrated that in dogs with low TT4 and normal TSH, hypothyroidism can be confirmed by measuring basal GH or by running a TRH stimulation test (measuring GH and TSH after administration of TRH). To further explore more accurate diagnosis of hypothyroidism, CHF-funded researchers also plan to examine the utility of measuring basal TRH concentration, ghrelin concentration (another hormone shown to be elevated in hypothyroid dogs), and plasma thyroid hormone bioactivity. Promising diagnostic tests then need to be applied to a larger cohort of dogs to ensure usability and reliability in the clinical setting. CHF and its donors remain committed to finding more accurate diagnostic tests to help prevent, treat and cure canine disease such as hypothyroidism. Support AKC Canine Health Foundation research at akcchf.org/donate.