Writing a Life with Dogs and Horses

AKC Canine Health Foundation (CHF) board member Sue M. Copeland grew up in Texas with a love for animals and writing. At Texas A&M University, she found a major that reflected those loves: agricultural journalism. An avid horsewoman with a passion for dogs, Sue built a successful writing career in equine- and canine-enthusiast media. She was an editor and writer for Horse & Rider Magazine, a national equine publication, for 27 years, and has authored numerous award-winning equine- and canine-related books and articles. 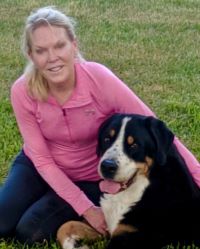 For years, Sue and her husband, Rick, shared their home with Rottweilers, including rescue “rotties” with behavioral problems. “We loved our rotties,” Sue explains, “but were interested in looking at other breeds. A friend suggested that, because we liked large, short-coated Working dogs, we should check out the Greater Swiss Mountain Dog. We did, and the result was ‘Mojo.’” Sue and Rick bought Mojo (CH Grace Farms Ace Of Diamonds) as a pet, but he turned out to be such a nice dog that people suggested they show him in the conformation ring.

Mojo quickly finished his AKC Championship with a professional handler. Says Sue, “Rick and I discovered we loved going to dog shows. But Mojo didn’t seem to share our love for the sport.” They retired Mojo to life as a pet on their Texas farm, but were hooked on “Swissies” as a breed…and on the idea of eventually getting one they could take to AKC dog shows. 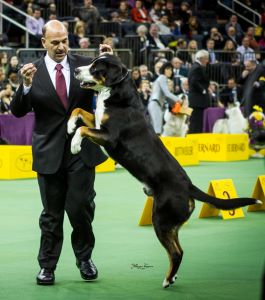 In 2010, the Copelands bought a male puppy from top breeder Kristin Kleeman. GCHG Derby’s Toast With Gusto, CGC, CGCA, (“Gus”) grew up to shatter breed records in the conformation ring with his handler, Scott Sommer. On his way to becoming the top-winning Greater Swiss Mountain Dog in history, Gus earned three National Best In Specialty Show wins, 38 Best In Shows (the previous breed record was three), and won his breed at the Westminster Kennel Club Dog Show four years in a row. He capped off his career by winning the prestigious Show Dog of the Year, Working Group, title for 2015, and a Working Group placement at Westminster in 2016 (another breed first). When he retired in 2016, he and Sue turned their attention to therapy-dog work. Sue and Rick now enjoy cheering on Gus’ offspring at shows. 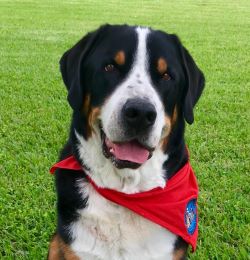 It was Gus that led Sue to CHF. “A big part of the fun we had during Gus’ career was meeting so many wonderful dog people all around the country,” says Sue. It was at a show that she met acclaimed AKC Judge and CHF board member Cindy Vogels. Having read that Mrs. Vogels also had horses, and wishing to thank her for acknowledging Gus in the show ring, Sue introduced herself. Later, through Mrs. Vogels, Sue also had the chance to meet then CEO of CHF, Susan Lilly. The three stayed in touch, and Sue was invited to join the CHF Board of Directors in 2016. In addition to her contribution on the Board, Sue supports the Foundation’s communication efforts as an advisor, writes about CHF-funded research, and represents CHF at the Houston World Series of Dog Shows and other events.

Sue says she loves to spread the word about CHF’s benefit to all dogs, and to their humans. “CHF is on the cutting edge of the One Health Initiative, which is a collaboration between human and veterinary medicine” Sue states. “We fund research to study vector-borne diseases that affect dogs and humans, such as Bartonellosis and Lyme Disease. We also fund studies on canine osteosarcoma, which resembles juvenile bone cancer in humans.” Sue’s passion for animals and her ongoing contribution as a journalist ensure that dogs and humans benefit from this research now and in the future. Thank you, Sue!