Giving Back to Creatures Great and Small

Rhonda Hovan grew up caring for orphaned and injured wildlife from her suburban neighborhood. As a teenager she asked her parents for a dog and was told that she would be responsible for its care and training. After careful research, Rhonda chose a Golden Retriever based on the breed’s reputation for trainability, and after Faera joined the family, Rhonda spent her summers teaching Faera dozens of tricks. When they took their training to the next level and entered some AKC obedience trials, the pair performed well - earning multiple high in trial awards. Rhonda was hooked on dog sports! 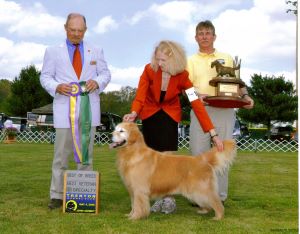 Rhonda showing Pete (BISS CH Faera-Tainsh PDQ, SDHF, OD) to one of her many Specialty Bests of Breed, this one from the Veterans Class

Rhonda continued to train and show Golden Retrievers in obedience and conformation, and eventually started breeding under the Faera prefix. As she became more involved in the world of Golden Retrievers, Rhonda started writing articles for the Golden Retriever Club of America (GRCA) News, the parent club’s bi-monthly publication. Her writing originally focused on conformation but expanded to include health and genetics topics. Rhonda’s writing gained attention outside the breed, winning the Veterinary Information Network Health Education Award, and the Eukanuba Health award, among others.  She wrote canine health articles for a number of organizations, including the Orthopedic Foundation for Animals, and also served on the OFA’s Board of Directors (now an Emeritus Director). 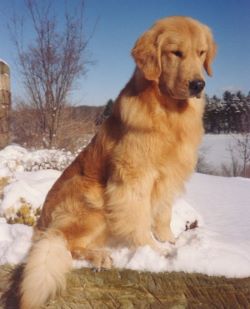 A pivotal year in her life came in 1999. Rhonda’s treasured stud dog, Thunder, was diagnosed with lymphoma right after she attended the AKC Canine Health Foundation’s National Parent Club Canine Health Conference. With the latest canine health research updates fresh in her mind, Rhonda reached out to scientists she met at the conference in search of ways that she and Thunder could contribute to health research. “I realized how little we as dog owners and club members knew about contributing to and participating in canine health research,” Hovan says. “I wrote a job description for ‘Research Facilitator,’ submitted it to the GRCA, and started working with researchers and the AKC Canine Health Foundation.” 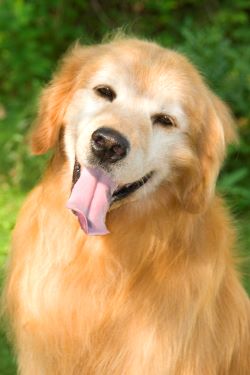 Thunder’s cancer diagnosis and death not only motivated Rhonda to help others participate in canine health research but also strengthened her resolve to give something back to the dogs that continue to impact her life. “Star was another one of my stud dogs,” Hovan says. “I created the Starlight Fund held at the AKC Canine Health Foundation (CHF) in his name and donated all of his stud fees to that fund to support canine health research.”

As an award-winning health and genetics writer with a strong history of working with researchers, it is no surprise that Rhonda eventually joined and remains active on CHF’s Board of Directors and Scientific Review Committee. “CHF is still the primary, if not only, organization that responds to breed-specific research requests,” Hovan states. “After losing Thunder, I found great comfort in knowing that his participation in canine health research was going to help make a better future for other dogs. It’s cliché, but dogs give so much to us, how can we not give back to them?”

Hovan remains dedicated to giving back to Golden Retrievers and continues to care for wildlife as a licensed rehabilitator. Thank you, Rhonda!