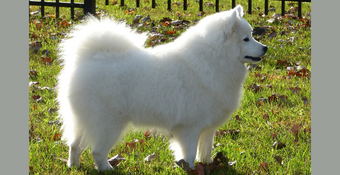 Grand Champion Platinum “Gala” took to the ring at 9 months old and this “Barbie Princess”, as nicknamed by her handler Karen Mammano, has had an incredible career. In fact, she has won Best of Breed at so many shows that she remains the lifetime highest-ranking American Eskimo female, the first female to achieve the status of Platinum Grand Champion and one of the very few female American Eskimo Dogs to ever achieve a Best in Show. Outstanding accomplishments include:

While I am enormously proud of Gala’s achievements, I credit Joseph and Diana Allen for their breeding program which the Allens describe in the following way, “We feel sound temperaments and sound bodies are equally important. We strive to preserve the attributes of the Eskie that constitute the very essence of the breed, and at the same time improving with each generation.”

I am grateful to the AKC Canine Health Foundation (CHF) for their investment in theriogenology, the science of reproduction. The research and residencies they fund enhance the body of knowledge that benefits responsible breeders and consequently dog owners.

I am pleased to support CHF to help all dogs lead longer, healthier lives.