How To Maximize The Golden Years: One Heroic Working Dog's Story

Editor's Note: Bretagne passed away on June 6, 2016. Learn more about her and the other dogs who participated in the CHF-funded Penn Vet Working Dog Center study, which tracked the health and behavior of the search-and-rescue dogs who served following the 9/11 terrorist attacks.


Meet Bretagne, who at nearly 17 years old is the last known, surviving search-and-rescue dog who served at Ground Zero after 9/11. Then get nine tips from owner/handler Denise Corliss, for maximizing longevity in your senior dog.

It’s her eyes that draw you in. Dark and soulful, they gaze out of a wizened face powdered with white hairs. They’re eyes that have seen disasters wrought by both man and weather; eyes that have searched for the living, and that brought comfort to humans who found the dead. 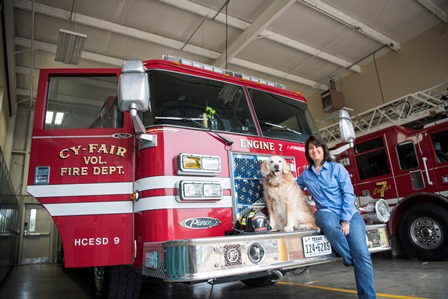 She is Bretagne (pronounced “Brittany”), a Golden Retriever just 3 months shy of her 17th birthday. She’s the last known living search-and-rescue dog who served at Ground Zero in New York City following the 9/11 terrorist attacks in 2001. It was Bretagne and her owner Denise Corliss’s first deployment. Together the rookies navigated the hellish rubble heap that was once the World Trade Center.

And now Denise is helping Bretagne navigate the challenges of advanced age.

Bretagne often needs assistance to stand. Her kidneys are failing. Denise, of Cypress, Texas, watches her like a hawk, ever ready to help. The two served together as a search-and-rescue team for over seven years before Bretagne retired at the age of 9.

“We grew up together in the search-and-rescue world,” says Denise. “She was my first working dog. I got her when she was 8 weeks old.” (See “Betting On Bretagne,” below.)

Denise manages Bretagne’s senior years with the same attention to detail that she applies to her search-and-rescue missions. “She was my working partner every day,” she says. “She served her country for years. Now she’s able to enjoy life as a pet. I owe it to her.”

Bretagne’s exceptional longevity comes despite her exposure to the contaminants at the World Trade Center. With funding from the AKC Canine Health Foundation (CHF), she is part of a study led by Dr. Cindy Otto at the University of Pennsylvania’s PennVet Working Dog Center launched to monitor the health and behavioral effects of the canine responders deployed to search there, at the Staten Island landfill, and the Pentagon. The study, now in its 15th year, enrolled 95 deployed dogs, including Bretagne, and 55 non-deployed search-and-rescue dogs, which served as controls.

In addition to the study providing vital information to handlers, trainers, and veterinary professionals on the health and wellbeing of dogs deployed on search-and-rescue missions, it also provides insights into health problems that may occur in human first responders.

Denise says Bretagne’s longevity is likely due to a combination of genetics and management. (The average lifespan for a Golden Retriever is 10 to 12 years.) We were curious about the management aspect, and asked Denise to share her tips for maximizing a senior dog’s longevity. Here are the nine she gave us:

Lucky for Bretagne, she has a partner who cares, and will do whatever it takes to keep her happy and as healthy as possible—a lesson from which we can all learn. And lucky for Denise, she still has her partner to care for.

A lifelong dog lover, Denise was drawn to the work of disaster search-and-rescue dogs in the late 90s, when she learned through a friend that volunteer “victims” were needed for testing the dogs for certification. “I volunteered at a local disaster training field, which replicates scenes similar to what the dogs can encounter on a real search-and-rescue deployment,” says Denise.

“The testers buried me in a rubble pile, which included chunks of concrete. I was safe, in a controlled environment, and had a two-way radio, in case I had a problem. But I laid there for hours, while the dogs worked other test components,” she continued.

“When I finally heard a dog sniffing above me on the pile, then barking to signal he’d found me, I felt an enormous wave of relief. That had a huge impact on me. I was just ‘playing’ a victim and felt that way. What must it be like for real disaster victims? I knew right then that I’d do whatever possible to help someone in a disaster.”

Denise learned that civilians could undergo special training with their dogs, and, if they qualified, could support federal emergency response efforts around the U.S. as unpaid volunteers. That became her number-one goal.

In 1999, she bought Bretagne, who was then 8 weeks of age, hoping the Golden Retriever puppy would grow into her search-and-rescue partner. (See “Betting On Bretagne,” below.) The pair’s early training included age-specific obedience and agility classes for Bretagne, to teach responsiveness, and to improve her dexterity and strength. Eventually it included sessions taught by handling experts at area disaster-training fields. The 20- to 30-hours a week for practice and training was balanced with Denise’s full-time job.

In 2000, her goal became a reality: The team became FEMA certified, and qualified as members of Texas Task Force 1 Urban Search and Rescue (USAR) Response System (TX-TF1, www.texastaskforce1.org). On September 11, 2001, TX-TF1 was deployed to perform search-and-rescue work at Ground Zero in New York City. Bretagne and Denise flew there with the members of TX-TF1 about five days later, as part of a second wave of FEMA USAR teams. Texas Task Force sent a 70-person team that consisted of four Canine Search teams, and various other disciplines, including Haz-Mat, Rescue, Medical, and Logistics specialists. 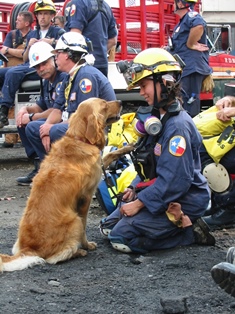 “I was anxious about what to expect once we got there,” remembers Denise. “In addition to being devastated for the victims and their families, we didn’t know if other attacks were imminent. Once we got to Ground Zero, our training kicked in and we went to work. I still felt a lot of emotions, but I was damn sure proud to be there with my Texas task force to help.”

Bretagne did more than try to find survivors. She had an intuitive sense for when her fellow rescue workers needed her. “For instance, she’d see a firefighter, emotionally and physically spent, and would go sit by him,” Denise recalls. “She was amazing. She brought comfort to many of the rescuers at the site.”

Over the years, the pair deployed to numerous other disasters, including Hurricane Rita in 2005, until Bretagne retired at the age of 9. Her work earned her multiple awards, including the PDSA Dickin Medal for Animal Gallantry, and a Hero Dog Award for search and rescue in 2014, given annually at the American Humane Association Hero Dog Awards in Beverly Hills, CA. There, instead of climbing a rubble pile in the aftermath of a disaster, she got to walk the red carpet with her favorite human, Denise.

But Denise’s true calling is about as far away from the red carpet as you can get. As part of a team that runs toward disasters, rather than away from them, she continues her search and rescue work with TX-TF1. She wouldn’t have it any other way.

"That day I volunteered to be the victim, I got to stay and watch the disaster dogs work,” she recalls. “They took my breath away. I’ve been doing this for 15 years. They still take my breath away.”

Bretagne’s and Denise’s partnership almost didn’t happen. “She was the result of an unplanned breeding,” says Denise. “I heard about the litter of field-trial bred Golden Retrievers through friends, and went to look at the puppies when they were eight weeks old.”

It was 1999. Through research, Denise had learned that sporting-type dogs make good search-and-rescue candidates, especially those that are field-trial bred. “They are strong and tend to have lots of drive, whether it’s to hunt birds, or toys, or eventually, human survivors in rubble piles, which you need in a disaster dog. They also tend to be medium in size, so can fit in an airplane or helicopter, but are big enough to climb a ladder or rubble pile.”

She also learned of some temperament tests she could do on the puppies, to help narrow down her choice.

“When I went to look at the litter, I tied a small toy to a length of string, and tossed it. Did the puppy chase it, pounce, and play hard with it? If so, that’s good. If I pulled the toy away, did the puppy stick with it, and follow it? Or did the puppy give up—a sign it would easily lose interest in a real search. I’d then hide a toy and check the puppy’s reaction. Did it try hard to find the toy? If so, that’s a great sign the puppy has the drive to seek.”

She tested the puppies with loud noises, as well, and even talked the breeder into taking them to a nearby field, so she could observe how they handled a new environment.

Bretagne was the only pup who passed the tests with flying colors. “I knew she was the one for me. Plus, she was pushy,” laughs Denise. “She’d climb over the other puppies so she could be the first one to try anything I asked. She’s still pushy today!” (That persistence is key in a disaster dog—it’s a sign she won’t easily give up.)

But when Denise told the breeder of her choice, he told her he was keeping Bretagne for himself. Denise was crushed, and left empty handed. That’s when her persistence kicked in: She called the breeder as soon as she got home.

"I said, ‘Look, I really need this puppy for search-and-rescue work. Will you please reconsider?’ He finally said I could have Bretagne. I drove back and got her right away. It was fate.”

While her canine partner was young, Denise would take her to as many new, loud, and stressful environments as she could, to help prepare her for what she’d face at disaster sites. “I hung out with her around fire departments and anywhere else there was lots of commotion and loud noises.”

The more time she spent with Bretagne, the more Denise knew she’d picked not only the right puppy for her, but also the right breed. “I didn’t set out to get a Golden Retriever, but she made me fall in love with the breed,” she says.

“Disaster dogs have to be very tolerant in crazy environments. They have to have a high drive to work, to be confident, to be persistent, and to not be people or dog aggressive. Plus, they have to be tolerant of physical and emotional stress. While any breed or mixed-breed dog can do disaster work, the Golden Retrievers I’ve worked with have had those attributes. Plus, they think disaster work is fun, so they want to do it,” she says. “That’s key.” 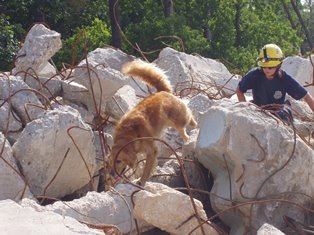 As you’ve read here, Bretagne proved time and again that she has what it takes to be a search-and-rescue dog. When she retired, another Golden Retriever, named Aid In The Search (a k a “Aid’N”) followed in her paw prints. Sadly, he recently succumbed to cancer at the age of 11. Third in Denise’s line of disaster dogs is the four-year-old Fully Charged And Ready To Deploy, whose call name is “Taser.” Both Taser and Aid’N came from field-trial bloodlines, and were bred by Anne and Doug McGuire of Vintage Golden Retrievers, in Katy, Texas.

(For more information on early training work with puppies, watch our webinar.)

Sue M. Copeland is an award-winning writer and editor, and a member of the AKC Canine Health Foundation’s Board of Directors.