Main Menu
Home > About Us > Who We Are > Clinician Scientist Fellows >  Pradeep Neupane, MS 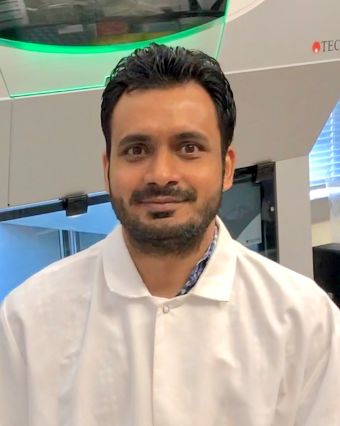 Mr. Neupane earned his Bachelor of Science and Master of Science degrees from the University of Wyoming. He is currently a research associate in the Intracellular Pathogens Research Laboratory and a doctoral candidate in the Comparative Biomedical Sciences Graduate Program at North Carolina State University.

Mr. Neupane’s research focuses on the development and validation of more sensitive and specific immunodiagnostics for canine and human bartonellosis, a disease caused by infection with intracellular bacteria from the genus Bartonella. Mr. Neupane’s ultimate goal is to develop point of care diagnostics for this insidious infection. He will also contribute to canine hemangiosarcoma research that will better define the potential association between Bartonella spp. and hemangiosarcoma in dogs.

Mr. Neupane’s mentor, Edward Breitschwerdt, DVM, DACVIM, has received CHF funding for infectious disease research. Read about his research:
02287: Enhanced Testing for the Diagnosis of Bartonellosis in Dogs
02519: Prevalence of Bartonella spp. Infection in Dogs with Cardiac and Splenic Hemangiosarcomas Within and Between Geographic Locations
02550: The Role of Bartonella spp. Exposure and Cardiac Genetic Variation on the Clinical Expression of Arrhythmogenic Right Ventricular Cardiomyopathy in the Boxer Dog